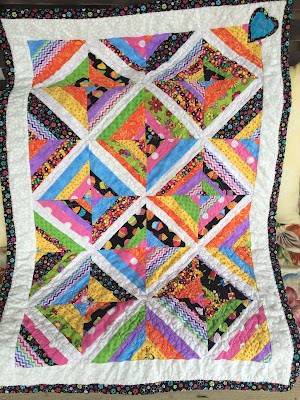 In Mark 5:41 Jesus brings a young girl back from the dead when He says, "Talitha, cumi."  (Tuh-LEE-thuh KOO-mee). It means "little girl, arise."

Back in the summer, my friend Lauren and her husband received devastating news: their baby girl --only six months old--had brain cancer. When Lauren heard it from the doctor,  she ran to a waiting room, fell facedown and bawled and screamed (she gives permission to tell this) and completely "lost it" for several minutes.

Then, as audibly as a human standing there speaking, a voice said "Talitha cumi." She knows it was Lord speaking. Immediately a peace flooded over her soul, and hope filled her, although she didn't understand what the phrase meant. She got up and began to gain strength for the battle ahead.

Lauren and her husband researched the phrase "Talitha cumi"  when they got home. "Little girl, arise."  From then on, they've held onto the belief that Sophia will be healed of cancer. 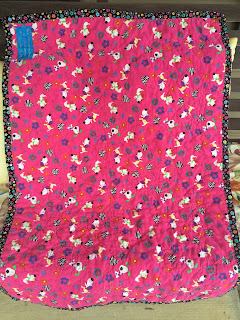 At the time when I heard the news, I happened to be on vacation to my husband's side of the family in Ohio.  Our oldest niece is a maker and seller of children's clothing and her name is--get this--Talitha.
(Her parents like the sound of it and that it means "little girl.")

Talitha had recently bought a Janome Skyline sewing machine which I was all too eager to try out. She gave me some bright, cheery scraps from her stash, and I began sewing them together into a string quilt.

That quilt became what I worked on when I wasn't making doll quilts or home dec things. I prayed for Sophia and her family every time I sewed.

The backing is pink doggie flannel. Sophia loves dogs, and flannel is soft, warm and cozy. Those chemo rooms get very chilly.


I sewed a heart to the upper corner of the front side and stitched the words "Talitha Cumi" on it. 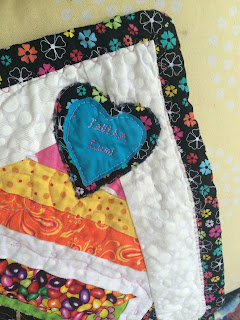 Then I labeled it, wrapped it and gave it to my friend Lu to give to her daughter Lauren to give to Sophia for her first birthday. That was in mid-December.

Sophia is doing all right. She's home for now. Her cancer is aggressive, but the treatments are proving helpful. And we hold onto the hope that Lauren found in scripture: Talitha cumi.

Beautiful quilts. Praying God will heal this little one.