Joel's Jack-o-Lantern: It's All in the Details 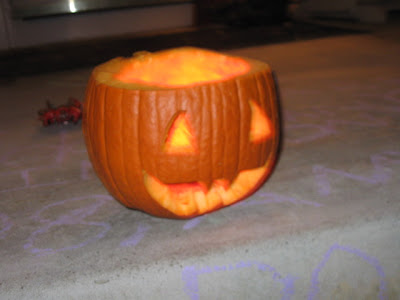 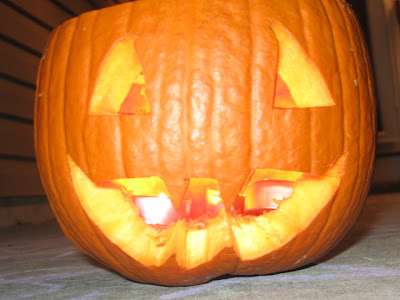 It really wasn't very big, but he liked to get up close with the camera to make it appear huge and so that you can "see every detail."

This year Joel had his heart set on making a jack-0-lantern. Every time he said the word, he emphasized the "o". Instead of "jackalantern, " he always said, "jack-o-lan-tern."

Normally I'm leary of using a sharp knife because all of ours really are only pseudo-sharp, which is scarier. The scariest part of Halloween, actually, for me! Paul was sick and rundown, so I did the deed. I remember loving the way Joel put his arm around my neck while I was carving. He loved the way I cut out the triangles. You would've thought I was Michelango the way he lauded my creation. In times like these, I realize my mothering still has some warm fuzzy effects on one of my children.

He wanted a specific shape mouth, so I had him draw it with a pen first. "It's all in the details," he said, the true artist that he is. I was just glad I didn't give Jack-o here a root canal AND a front tooth extraction while I was going for said details.

I took some pictures of Joel in costume (Optimus Prime) holding the prized pumpkin, but he deleted it when I wasn't looking. He's self-conscious these days. Then he set it down on the front porch where he had created something with sidewalk chalk. With camera in hand, he proceeded to become a Pumpkin Paparazzo. Voila!