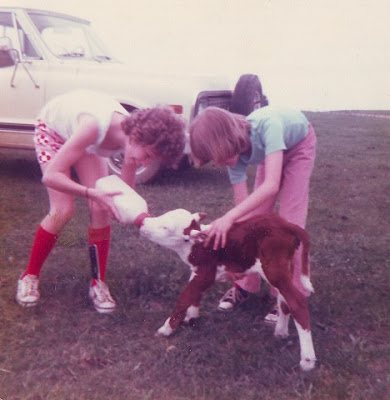 More lists here, folks, to bring some semblance of order and brevity to the page. Not that it's a promise; I said "semblance."
This is a gratitude list. I'm grateful for:

1. Memories like this one. My grandpa lived on a farm in Kansas, and it was the highlight of our lives to spend time there. It was like a slice of heaven to me, watching him with his cows. He was gentle and knowledgeable, and his voice was the only one they listened to. One year we visited when this week-old calf's mama had problems with her milk. Grandpa gave my sisters and me a chance to bottle feed him. Precious little fellow, that calf. But who, pray tell, let me out in public wearing those shorts and socks?


2. Charity pick-up trucks. But...have you ever scheduled a pick-up for charitable donations, only to have them come and pick up charitable non-donations? My daughter had four trash bags of stuff for her future classroom on the porch with her name on them. The truck took them away. When I called to report it, they were very nice but the long-and-short of it is, the truck took them to a thrift store an hour south of here and put the things out for sale. We could come get them if we want. Um, no thanks. The things were not THAT important to Sarah, but we were a tad miffed.

3. Protection in a minor car accident and the grace in the details. Joel and I were rearended on the way to school Friday. A college student hit us. Actually, it felt more like she drifted into us, but we felt it. A minor bump. When he turned around, he saw the young driver on her cell phone, texting. The intersection was busy, but providentially another school mom happened upon the scene and took Joel to school. I took down the girl's insurance information and reported it to my insurance company, but I probably won't report it to hers. No harm done to us or the van. She had said, "OMG, I'm really sorry. I am soooooooooo tired this morning." I have been in her shoes and "this" close to drifting into someone's bumper when utterly sleepy. So I think I'll love mercy and let it go. I hope she was scared enough to pay more attention next time.
4. The leaves slowly changing color this fall here in Maryland because of all the rain we've had. I'm so thankful because they should look splenDIFerous when my sisters arrive in two weeks from the southwest where it's been super hot and dry and brown.

7. Encouraging parents of students after observing me in action. We had Parent Visitation last Thursday on the very day we had to change art rooms. I had 25 minutes to haul supplies downstairs, set up tables and chairs, get the paints and supplies out, smock up, and deal with a hot flash without air conditioning. Having parents there was rougher on my nerves than having an official performance by my superiors. I introduced myself and found out whose parents were there. Then I introduced the lesson: I told the students we are doing a piece called "Monochromatic Triangles" and it's up to them to interpret the title their way. "I am not going to tell you how many to triangles to paint. And they can be any size or shape. You just have to use at least three different values of the hue I put in front of you." Then I caught myself and laughed. "Well, by definition, triangles have a particular shape, so let's make sure ours are three-sided!" Paul asked if they fired me. No. You can't fire a volunteer.

8. Humor. This SNL parody, which I found via Kevin DeYoung's blog yesterday, cracked me up. "British. Very British." Check it out .
Penned by Zoanna

The shorts and socks rock! Oh how FUN to feed the calf! You look like you're lovin' it!!!
Blessings in your thankful busyness!