P is for Pauline 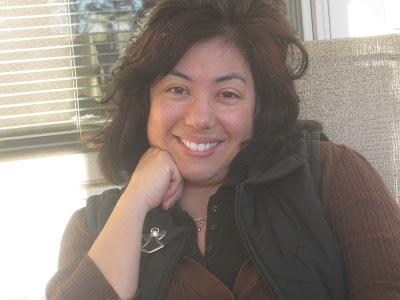 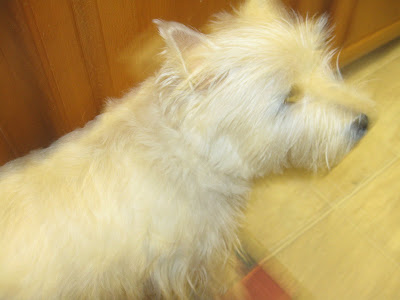 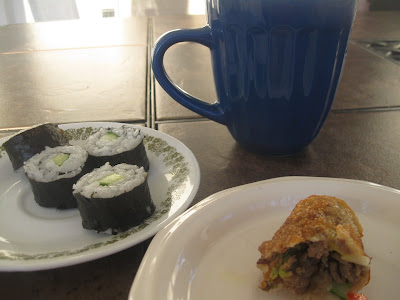 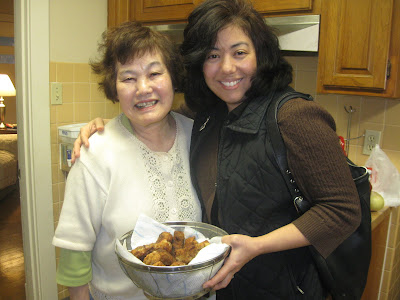 We're coffee buddies. That's what we call each other. Pauline invites me in for coffee once a week while her talented daughter (a high school senior) teaches my youngest son to play piano.

She is a military wife, and that means a few things: she jumps in fast to the active life wherever she goes, she makes friends quickly, and she will be moving soon. That last part is hard for me to write, but it's true. We're not sure when, but the Navy does, and they're not telling. Yet.

(Her sweet and spoiled Westie named Teddy isn't telling either. A good belly rub and mum's the word with that little terrier.)

So we do what we do best to make the most of the time: talk. Talk, talk, talk. Pauline is one of those people who asks great questions and isn't afraid to be gut-level honest about herself. She also gets my jokes, which helps keep the friendship going. I don't think I could be good friends with someone who didn't have a sense of humor. I don't know how to act around chronically serious people. Pauline can make me laugh with just a look. She has the most expressive face. Norman Rockwell would've hired her for her eyebrow movements alone.

Pauline's screened-in back porch has been the platform for her special brand of hospitality. She homeschools her four kids, as did I for many moons, so we understand each other on that level without saying a word, so we don't talk home schooling much. We both have high standards in education. We both have husbands who are driven to succeed and want the same for their kids. Academics hit the conversation chopping block as soon as we step past the kitchen.

We both love the Lord, the free enterprise system, and lots and lots of creamer in our coffee. She has a Jewish father who served in World War II and a Buddhist mother who makes killer sushi. You can imagine the stories she can tell about growing up. And I thought I had eclectic religious roots! Too bad her mom lives out of state, or I know where'd I'd be going when I get the craving for Japanese food.

Oh, and we both 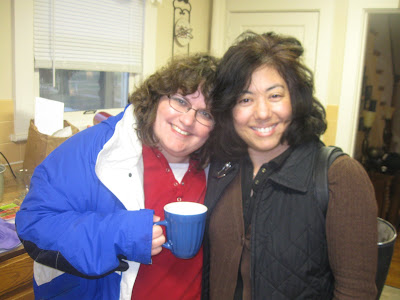 are obsessed with our hair. (This picture betrays our obsession.) She told me once she thought she had missed her calling; she has always wanted to be a hairdresser. So I said I had also missed my calling--to sit in a hairdresser's chair week after week, and not for curls and color either! I'd pay $10 just to have someone play with it. No talent required. One of these days I am going to go over to Pauline's house with all my hair product and we will answer our "conference calling" for a half hour while my son tickles the ivories. Chopin or This Old Man, it doesn't matter the background music; when someone wants to style your hair, it is just uber relaxing. I would love to have hair as thick as hers; she would love to hair as soft as mine. We swap compliments like drug dealers on a street corner. Maybe that's why we get along so well!

Or maybe it's because she lent me her blue coat the day I thought the spring would stick around past noon. I told her I love the patriotic look, so she gave me a matching cup as a prop. Just kidding. That was happenstance, much like our friendship. I like this "mug" shot of us.

Pauline is a good mom. She is raising her children well. I appreciate that. They are mannerly and know how to carry on conversations with adults. I used to teach art to two of them. But Pauline craves one-on-one time with her friends, so when I'm over there, she shoos them away so we can talk. It'd be different if we had three or four hours to chat.

Pauline and I are savoring what precious little time we have left together before she moves. I think if people viewed all of their relationships like we do, the world would be a happier place. We haven't known each other long, but she is leaving a legacy of friendship I will treasure forever.
Penned by Zoanna

I need a coffee friend here. It's missing in my life right now.

Carpe diem! Glad you two have seized the moment of friendship presented to you.

Thank goodness for Skype..it means never having to say goodbye.

You are cookin' baby! I just thought back to fun posts you wrote inspired by the "If You Give a Mouse a Cookie" etc. books…
I keep thinking "If You Give a Gal a Challenge" would be a great title for you since you can be "challenge motivated"! That's a good thing!
Pauline is precious!

What a wonderful friend! You will miss her, I know.