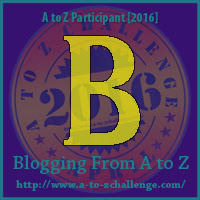 I've decided to use the April  A to Z Blogging Challenge to finally write about the experience that changed our lives for the better. It happened in January, but I'll offer backstory for the sake of my non-regular readers.

Whenever I had time or energy in the midst of the event to sit and write about it, I'd end up staring at a blank computer screen,  the feelings too strong for words.  Too much effort, I told myself.

I didn't want to write fluff for the sake of keeping up the blog, either. Hence, the virtual silence.

But I'm ready now to tell the story, piecemeal.  It might or might not be chronological. Flashbacks have a way of creeping into my daily thoughts, as they do yours, I'm sure. I'll let the letters of the challenge guide me.

The evening was like any other in our house after dinner. I was settled into my recliner with the computer, and my husband was stretched out on the sofa watching TV and playing solitaire on his tablet.

"I have to have heart surgery," he said, interrupting his game.

His tone was almost nonchalant, but I have learned that my man delivers some of his heaviest news with a monotone.  He used that tone in October of 1985 to tell me his brother had died  One year later, 20 days before our wedding, he called and told me his mom had died just hours after we had visited her in the hospital.

"Yeah. I saw a cardiologist today about my echo results. She said I should really strongly consider heart surgery. Her actual words were, 'you're a ticking time bomb.'"

"They used to, but they've been seeing dissections in the lower numbers," he informed me.

The cause of his brother's death at age 33, and mother's death at 58, as we found out from autopsies, were identical: ruptured aorta.  We needed answers. What causes that?  Were they coincidental or was there a link? Sudden death is devastating enough, but add a mysterious cause and it adds to the grief. Would there be another in the family? If there was any way we could get warning,  we wanted to know.

Genetic testing ensued for all members of his family. The syndrome, they found, was widespread. All the surviving brothers and my husband showed classic signs. Including the fatal flaw: an enlarged aorta. His two brothers and a nephew (the son of the deceased brother) ended up needing cardiac surgery when their numbers hit 5.0.

Now, despite all the "preparation" we had, I wasn't prepared to face heart surgery when my husband was the patient. My precious, beloved, 54 year old husband.

The bad news hit me in the heart, too.

Oh, so glad you are on the other side of this now and that he is doing well. How very scary!

I have not had any family member with this. However, my husband's best friend's family had this exact thing. It started early on, long before they understood it and my husband's friend lost his father and two Uncles before the age of 50. As Cardiac care advanced, so did the testing, and our friend and his brothers were all tested. One brother did not do well, but the rest did. Including our friend. His children had the testing. They all had the problem. Two have had the surgery, one will have it eventually.
I am sending prayers, and God's Blessings for you and your husband.
Please keep us posted!