Stocking Up in the Hodgepodge Lodge

Whipped up like a batch of sugar cookies comes this new batch of Hodgepodge questions. Thanks, Joyce.

When the kids were little, I did the stocking stuffing on Christmas Eve after they were in bed. They had to remain upstairs in their rooms in the morning until given permission to come down, but could not peek into their stockings until I had the requisite Christmas morning picture or two on the steps. (I did that up until a couple years ago.) 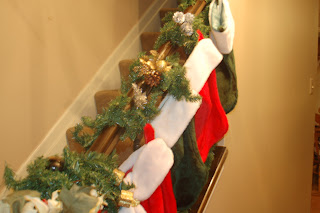 When they  were older, they began buying candy for each other and for us, their parents, and being sneaky little elves about it.  I still stuff everyone's stocking  on Christmas Eve--with candy, small-amount gift cards, Chapstick, pocket tissues, batteries, a pen or pencils, stickers, and so on.

I'm still the first one up. This year is going to be a little different since we have a newlywed son, and they are celebrating on Christmas Eve with us and having their very own first Christmas at their home, just the two of them.  Awww. Sniff, sniff for me.  Yippee for them.  I might make everyone bunch together on the steps and pose with their stocking just to throw a little grief nostalgia into the festivities.

2. How many hours of sleep do you average at night? Is it enough?

3. If you had to give up one thing for the remainder of this year what would it be?

4. The Duke and Duchess of Cambridge (or Wills and Kate as I like to call them) have announced they're expecting a baby. Do you follow news of the Royals?

Oddly enough, I "never" think about them, but just last night for some odd reason (had not heard the announcement), I was laying in bed thinking, "I hope Will and Kate have a baby soon."  So random. Then today I read this question.  (Cue Twilight music.)  And then tonight at the checkout counter of the grocery store, I see a tabloid, "Camilla Back on Booze" and I wondered if fellow Hodgepodgers had seen that. Funny how you think of other bloggy friends during the week, huh? Things you might not notice otherwise suddenly catch your attention because so-and-so had that on their blog!  Or is that just me who gets  her real life and her online life entwined?

a mix of laughter, whining, incessant talking, screaming, singing, sounding out words, sibling squabbles, washer and dryer on the "constant" cycle, the words "Mom! Mom! Mom!" and "Why?"  877 times a day, babies cooing and crying, toilet lids slamming, Cheerios spilling, Legos being raked through a bucket, Legos being stepped on which itself is actually quiet but it's always followed by an associated sound from the stepee's mouth.  The sounds of childhood  are mostly happy  ones.


6. Fruit cake-yay or boo? What's your favorite dessert made with fruit?

Ya know, I bet I'm in the tiny minority, if not the only one on the planet, who actually likes fruitcake. But I will not go so far as to say "yay."  I could go the rest of my life and not miss it, but if offered a piece, I would take it. Rather, I used to. Don't think it's worth the gluten problems I have with any cake now.

7. What is one thing you want to accomplish before 2012 comes to an end?

I want to finish sewing the pillowbed I started making for my old dog, Brownie.  She is using an old chair pad now, but I'd like to make her something bigger from an old, flat bedpillow and some scrap fabric that she can't rip (I hope).

I was mid-project last week when my machine had a problem. Top thread wouldn't pick up bottom thread. No matter how hard my Mr. Fix-it Hubby tried, no matter how many times I tried to solve the problem, I had to take it in for repair. The guy says there is something broken for sure--and it'll either cost about $65 or $300 to fix, depending what he finds.  My hubby and I agree it's not worth even $65 to fix since it cost around $130 new --19 years ago!  Cheaper to get a new one with better features these days.  Not that I will. I wasn't counting on having to replace my seldom-used sewing machine right now.

Thankfully I have a friend who kindly offered to lend me her machine. I have mixed thoughts about that. Would sure hate to have hers go kaput in my possession, but I really do have some things I'd like to sew for Christmas and before football season is over. Oh, and that dogbed.

8. Insert your own random thought here.
Attention: I have had to postpone the start of the
the Christmas Tour of Homes till Dec 13th? Yesterday's post explains why. Are you planning to join me? Show us your house/apartment/dorm room/cabin all gussied up for Christmas.  You have a week's grace. I hope you join in the fun!

I *love* your answer to number 3! LOL

I wish I had thought to give up dusting. Thank goodness for "swiffer" cloths.

I'd LOVE to give up dusting! :D And I definitely think about my bloggy friends during real life. "I wonder if so and so has read this book or seen this?" So you're far from alone. :)

...ahhhhh, a first christmas at home as newlyweds. How wonderful.

I am with you on the fruitcake...we certainly seem to be in the minority, don't we?

Fantastic answer to #5...brings back lots of warm memories for me, too! Yeah...I know it will be different with the newlyweds, but the best is yet to be, right?

Lots of people mix up blog life and real life : ) Hubs said a co-worker told him the other day that his wife started telling him a story in which she uttered the words, "Joyce said..." and the hubs was like, "Who's Joyce?" (They do not live in our state but he and hubs do business together so he's in the office occasionally). He knows me but it didn't occur to him his wife would mention me as if we were close friends : )

The newlywed traditions...I'm sure there are mixed feelings but good for them for establishing their own holiday plans. Other than when we lived overseas we've always spent Christmas with one family or the other. That also is a mixed blessing : )

No dusting! That was great, I'd gladly give that up to. I have way too much stuff to dust around.

I often think of my blogging buddies too so you are not alone.

Hope you get that doggy bed made!