Most Appealing Public Restroom in the South

I do make a habit of using restrooms, but not blogging about them. Especially not public restrooms.

This one in Kentucky, however, had blog fodder written all over it from the moment I walked in.  (Bloggers understand that anything can be material.)

We were at the Buffalo Trace Distillery in Kentucky, a stop that my hubby really wanted on the itinerary. It's a  bourbon whiskey distillery, and while I'm not a bourbon drinker (and can only take it in "trace" amounts in desserts) we humored the hubs and went along. Not that we had a lot of choice; he was literally in the driver's seat.

I didn't take pictures of the distillery because :
a) I didn't feel like lugging my big camera around
b) you can find them online
c) I didn't have much battery power left on my cell phone

But I had just enough to shoot pictures of the most appealing, exceptionally clean public restroom in the South.  I daresay the most delightfully memorable restroom ever.

Did I just say that on the worldwide web? (I need a life.) 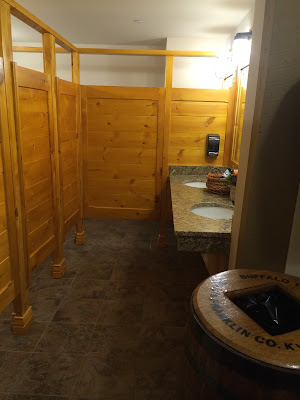 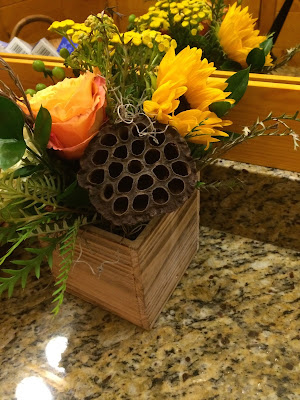 When I finally emerged from the pretty bathroom, my son exclaimed, "It's about time! What were you doing in there, taking pictures?"

I chuckled and showed him my phone.

We went on the tour led by a charming older guy named Jimmy. What were my take-aways from the distillery tour?

a. Limestone and the extremes in temperatures make for ideal natural element for brewing bourbon.
b. Bourbon is only an American concoction.
c. Buffalo Trace Distillery only uses oak barrels, and never uses one twice for distilling. "It's like using a teabag twice,"  Jimmy told us. "Not bad, but not the best flavor the second time around."
d. "Trace" is the old West word for "trail." Many bison resided here in the lush green grass, providing food, hides, and horns for tools made by the native tribes.
e.  Whiskey makes for some good medicine. During Prohibition, the only whiskey allowed by law had to be prescribed by doctors.   Wouldn't you know, people discovered quite a few things that ailed them during that time.  Some 20,000 prescriptions were filled.
f. At the tasting after the tour, I found a delicious beverage: bourbon cream. Great with root beer!
g.  "Kentucky" comes from several variations including the Iriquois word "Kah-ten-tah-teh,"meaning "Fair Land of Tomorrow" and the Cherokee  that sounds like "Keen-tock-AY"  and means "Place of Meadows."
h.  That bathroom! People, I'm telling you, it was picturesque!

So next time you're blazing a trace through Daniel Boone territory (or following one already blazed), and find yourself wanting bourbon and a bathroom, you must check out Buffalo Trace Distillery.

You even have my permission to skip the tour. Just use the ladies' room (hubby said the mens' room was cool, too, but he wasn't about to stand there and take pictures). And grab some bourbon cream on your way out.

That is a lovely rest room and lots of stalls too. I really hate going to a place or function where there are hundreds of people and when you finally find the rest room it is tiny, has only two stalls and a long line of waiting women snaking out the door. More often than not, there's no toilet paper left by the time half the line has progressed. I only speak for Australia of course, I haven't travelled anywhere else.

I ALWAYS notice public restrooms! I may or may not have taken a picture (or two) in one also. Just sayin'