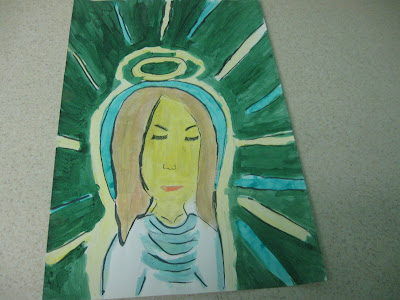 My fifth and sixth graders have
been studying the Byzantine period
in their history class, so I came up with
an art project to go along with it.

We talked about artists working with what is available to them at the time.
Paint has not always been readily available, but every culture has found a way to paint with natural ingredients.

Paint has to have three things: a solvent, a pigment, and a binder. In this case, our solvent is water, the pigment is food coloring, and the egg yolk is the binder.

("Recipe" per color is 1 egg yolk, 1-2 drops of food coloring, and 1 tsp of water per color.) I happened to have neon food coloring available which the kids thought was cool. The paper was fingerpaint paper.

The egg yolk dries fast, so this painting has to be worked quickly. It took two class periods (about 80 minutes of actual hands-on time). 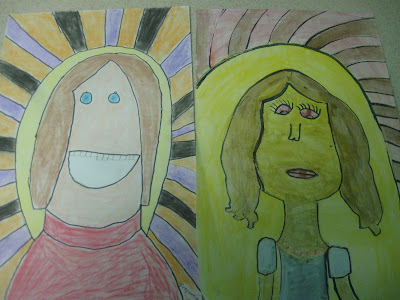 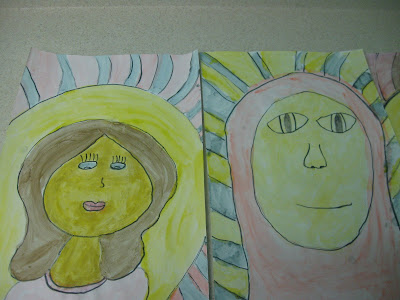 The three main subjects depicted in Byzantine art were the Virgin Mary, Jesus, and saints. The backgrounds often featured gold halo-like effects and movement with color,the people were shown with big eyes, and their attire was vivid, sometimes adorned with jewels.

For this assignment, I told the students their subject would be Mary, she had to have a gold halo effect around her hair, they had to use a sunburst border, and Mary should have big eyes. (I added the note about big eyes in my lecture while they were working, and unfortunately one artist had already painted closed eyes. I didn't take points off because it was my fault.) One kid was allergic to egg, so I allowed him to use chalk pastel (the one with the wide open mouth is chalk pastel). I'm not sure where my other four students' work is. I thought I photographed them all.

At any rate, this project is one I would gladly do again. One thing we learned was that farm-fresh eggs (as in less than a few days old) create richer pigments than storebought eggs. The consistency is thicker and it holds food coloring brilliantly.
Penned by Zoanna

Even if the "yolks on you" it is worth the beauty!
Love these!

I truly love your blog.. Great colors & theme. Did you develop this site yourself?
Please reply back as I'm planning to creat my very own site and want to learn where you got tthis from or
edactly whgat the theme is named. Cheers!

Feel free to surf to my weblog: online electronic stores with credit