Down on One Knee

Finally, I bring you to the part in Steve in Ambrey's love story where he proposes marriage to her at the beach.

Together with her parents, they arrived for a Labor Day weekend as guests in the home of  her parents' friends. They had been there  a few times before, so they were like "one big happy family" already.  Details of the proposal  had been well discussed by all participants-- except for  Ambrey, of course.

Steve would inform her Friday night that he was super tired from school and work, and just wanted to sleep in till ten or so.  (His room was on a lower level of the house, so the sneaking around was quite doable without her hearing.)

In reality Steve would be getting up early, along with A's parents and Mr. L (the host/amateur photographer extraordinaire).  The four of them would scope out the perfect spot for the
proposal.

They found the spot for Mr. L. He would hide out behind a beach umbrella rental stand. Cheryl ended up using a pup tent.

Steve got roses and baby's breath from a local grocery store, and the florist on site  went to extra measures to arrange them beautifully for the dashing young man. Before this story is over, many "strangers" will have become part of the romance, and who knows--they might remember this special
moment for a long time.  Steve hid the roses in the back of the fridge, if I am recalling correctly.


-Sleep in till at least 10. Have a late breakfast and then everyone who wanted to would hang out like normal on the beach Saturday from about noon till 3-ish. Shower, change, get ready for early dinner.
-Mr. L and his wife wanted to treat their guests to a nice dinner out Saturday night.  Fancy restaurant.  Guests had brought appropriate attire so that they'd look nice for--you know--"dinner."
- On the way there,  Cheryl would deliver the "big order" in the box to a customer who lives right on the beach. She is a regular customer and friend, and whenever they get together, well, you know how women like to talk.

So "while the women talk," why don't you two (Steve and Ambrey) go for a walk or something?

-The "big order" was a box containing the picnic basket and new beach blanket. As soon as the happy couple were out of sight down the beach, Cheryl and company hurried to set the stage and get themselves in position.  The "stage" props, as I've already written about, were  1) a message in a bottle  2) shells that spell out his question  and 3) picnic  basket and roses.

-Steve had his phone (on vibrate)  in one pocket, and the diamond ring  in the other, snuggled into a clamshell. Cheryl would text him when all was ready. His signal to head back, Ambrey clueless.

Some things went better than planned. While sunning in the afternoon, covered in sweat and sand, Ambrey said something to the effect of  "I'd love to take one more walk on the beach later when we're dressed up."    Perfect! They wouldn't need an excuse!

Other things didn't go quite according to plan. A light rain a bit too soon for everyone, so they had to retreat to the house .  And one other thing, No one had planned on the biting flies--dozens of them.  Steve and Ambrey were getting bitten.  Behind the umbrella rental stand, Mr. L was getting bitten. And in her little pup tent, Cheryl was getting bitten.


Thank You, God, they're getting close! says Cheryl from her pup tent, camera in hand. 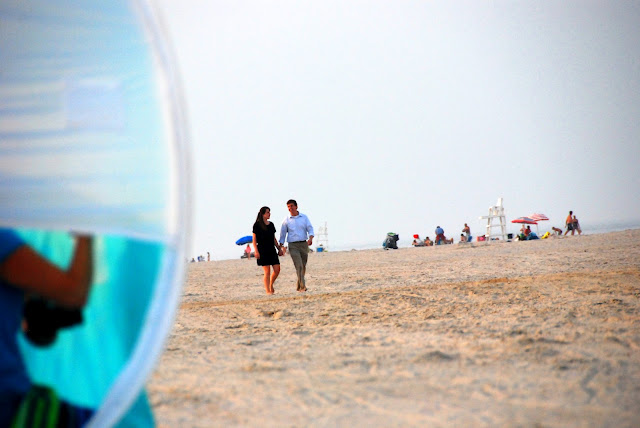 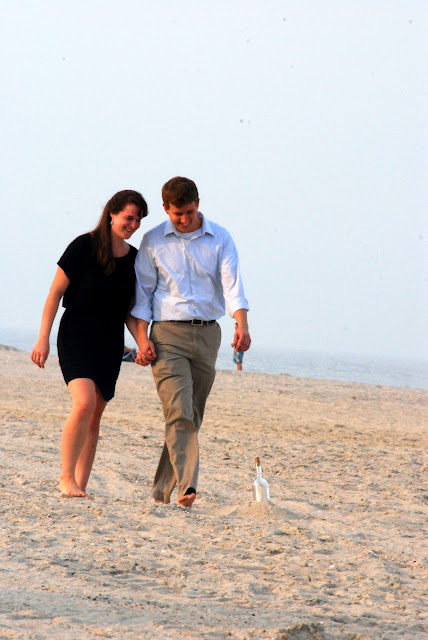 Well, it looks like some kind of message. Let's see what it says.


I can't get it out!   Whoever put it in there sure did wanna keep it sealed up tight!

She hears cameras clicking. She giggles. Could it be? 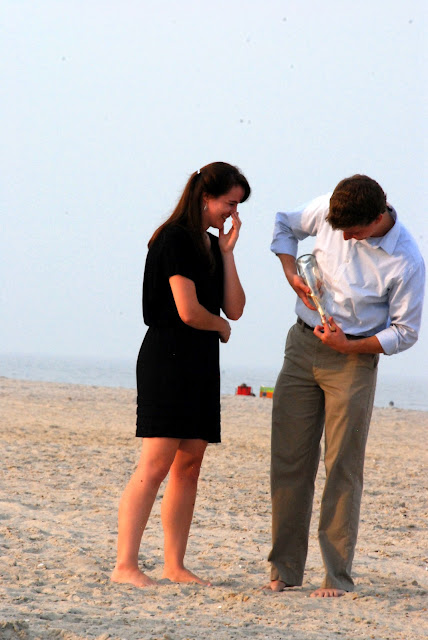 Let's hang onto this bottle and open it when we get back to the house, maybe? 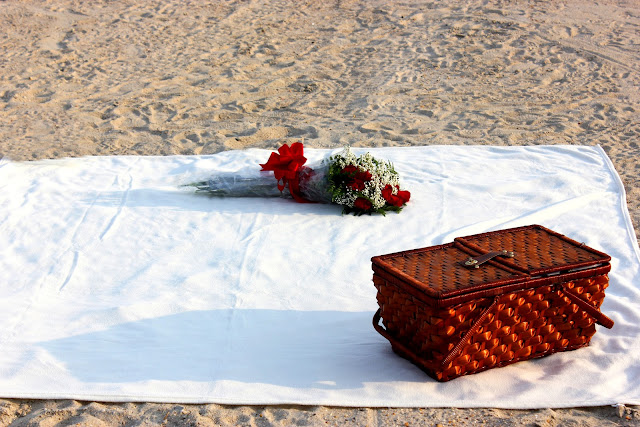 
Turn them over, babe. Left to right. 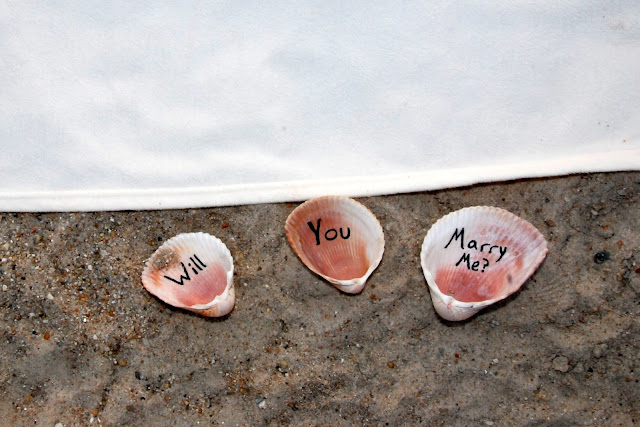 Just at that moment,  the dashing young Steve got down on one knee, reached into his pocket,  pulled out a clamshell, opened it wide to reveal a sparkling diamond solitaire ring, and began pouring out his heart to the young, beautiful Ambrey. 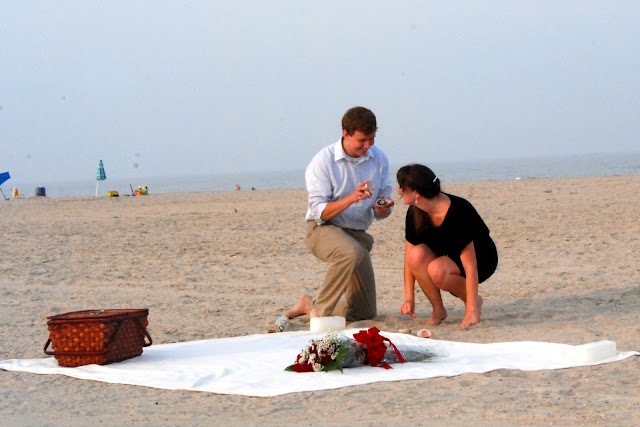 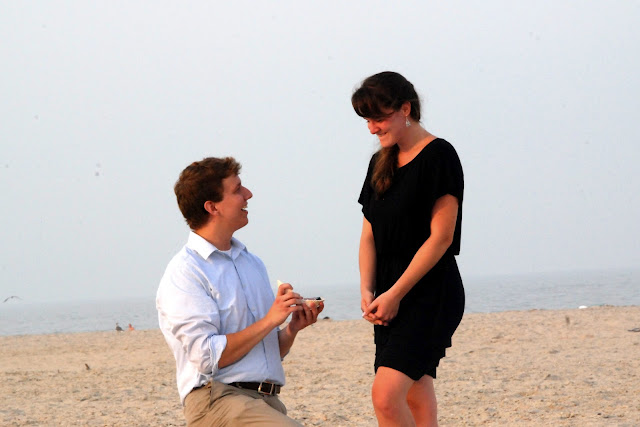 The sweetest words she'd ever heard,
words she could hardly wait to hear,
words he had been saving in his heart
till his chest would pop if he didn't.

After all, he had given her his word
that those words
would be said when
he really was serious.

He added how much he loved her, how long he has loved her, what a gift she is to him, how happy and fulfilled he is in her company, how he thanks God every day for bringing her into his life, and he would be absolutely honored and thrilled beyond words to have her be his wife forever and ever. 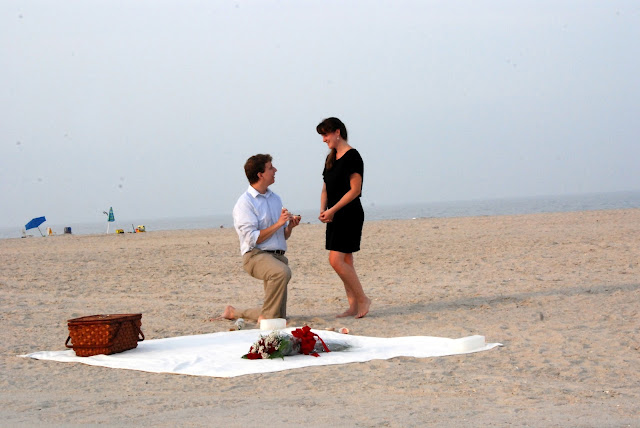 She couldn't remember exactly, for all the nerves,  and neither could he. Perhaps I embellish my narrative just a bit. You'll forgive me.  But truthfully, my son Steve is a word bird, and so I'm sure it wasn't just a "Hey, shweet-haht, ya wanna get hitched or what?" 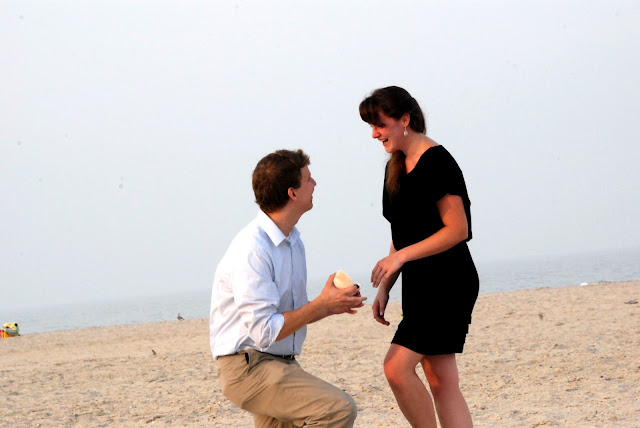 Will you marry me? 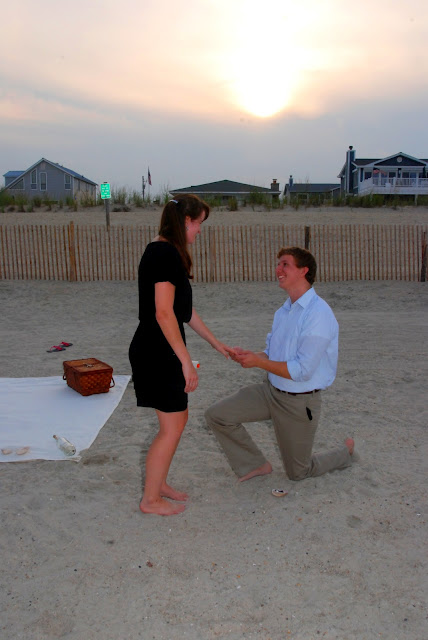 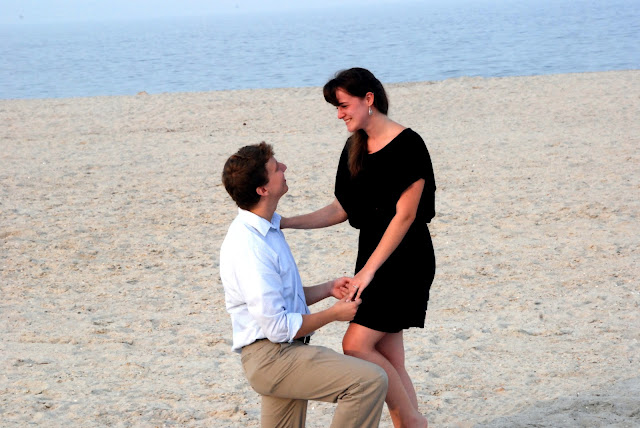 Yes, I will! I love you, too, babe, soooooooooooooo much!!!! 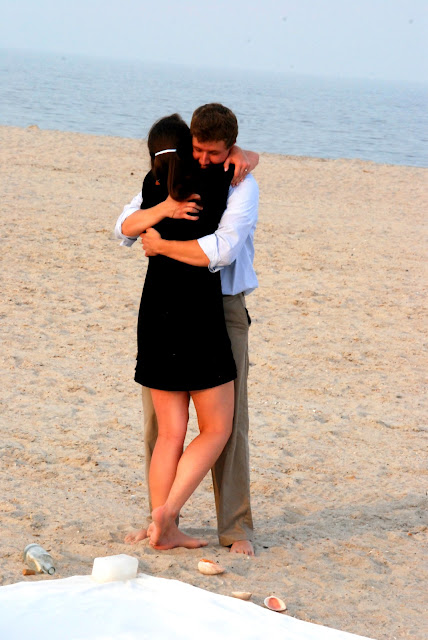 Steve and Ambrey  look at each other like this all the time, folks, not just for photo ops! 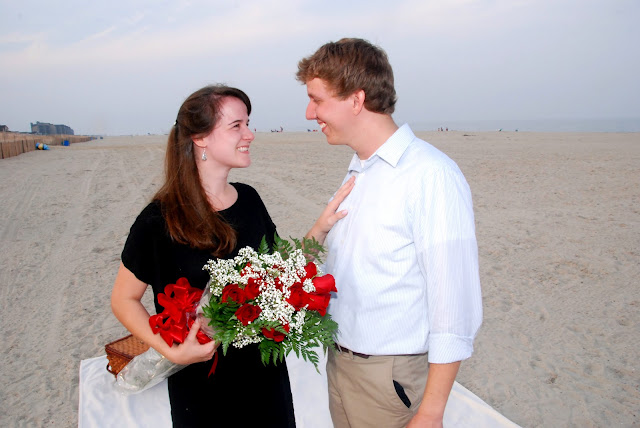 Four little children, who had been watching, came running up to them, waving branches. The little three-year-old girl asked, "Are you guys getting married?"   And Ambrey, showing her ring, said, "Yes, we sure are!" 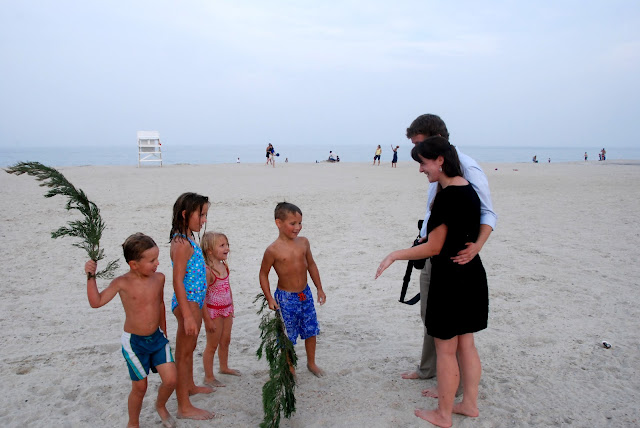 A few bystanders who had witnessed the proposal, applauded. One woman rushed up and said, "Look up! A rainbow!" Sure enough, but it wasn't a regular rainbow. It was more like a ribbon of rainbow colors.

The very bit of rain that had sent them for shelter earlier in the day, was followed up by symbol of a covenant from heaven. 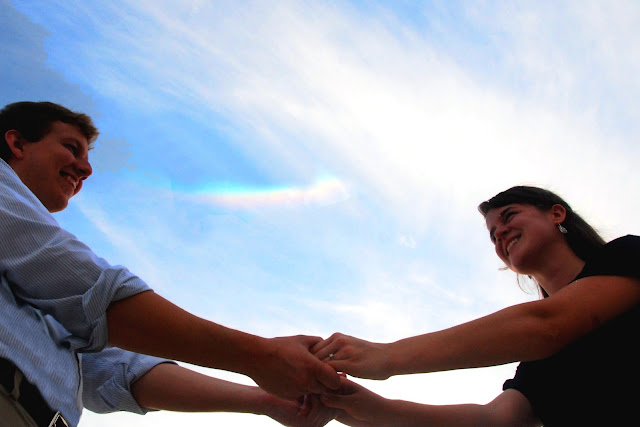 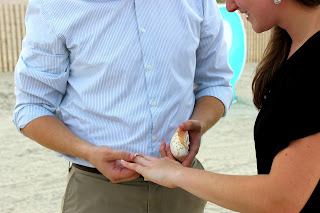 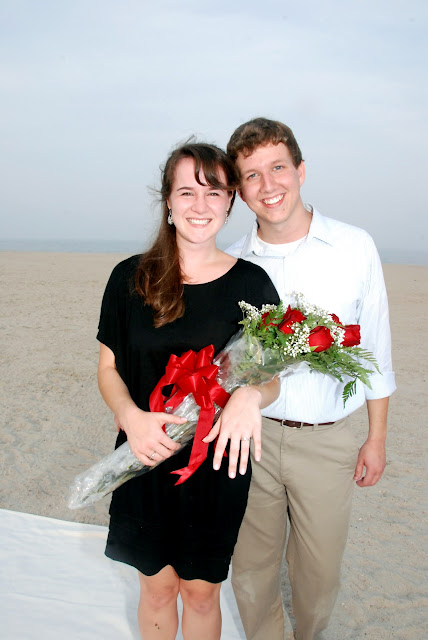 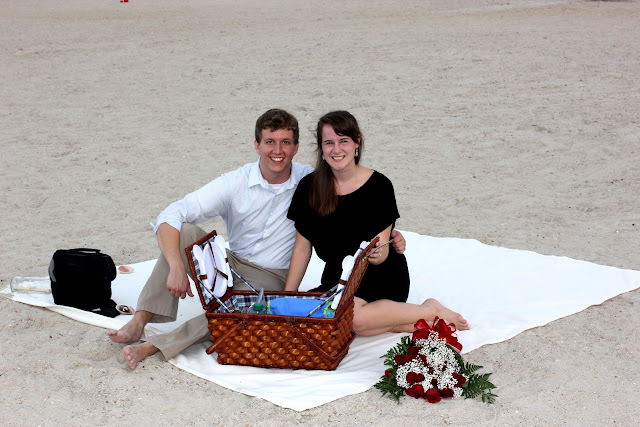 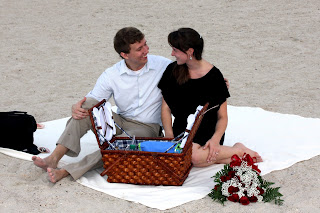 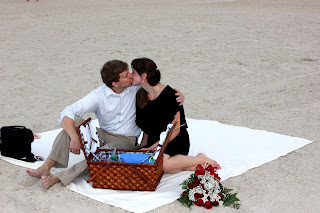 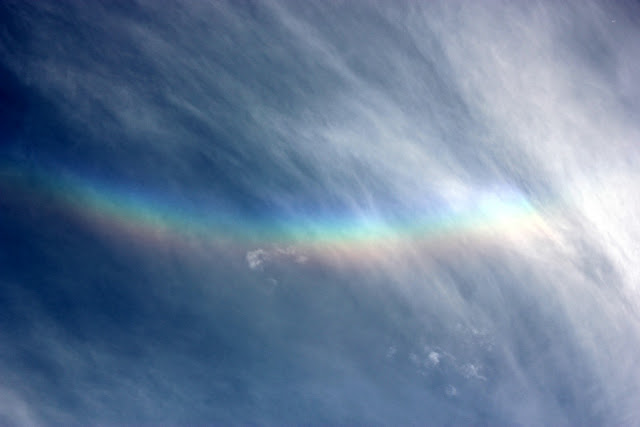 And then, with a rainbow above them, and a sunset before them, and love all around and inside them,
they drove off to a fancy schmantzy seafood restaurant to celebrate.

Just the two of them

with sparkles in their eyes

as bright as the diamond on her hand. 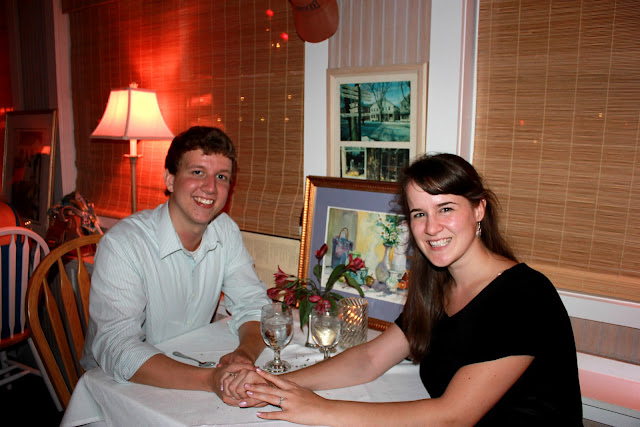 How beautiful!!! Great photos and memories I pray they'll always cling to! The shells! The bottle! The flowers and picnic basket! (all so wonderfully planned) And the rainbow promise! (couldn't have planned that!) Awesome as ever!
Love, sweet love!!~

Even the sun cooperated : ) Such a sweet story and how fun to have it all captured in pictures! Best wishes to the happy couple-when's the date?

Aw, so sweet and creative!