Once upon a time, there was a little girl named Zoanna who had an ornery streak to her. She enjoyed nothing quite as much as having fun breaking rules without getting caught. And she was the preacher's daughter. She and her sister, Rachel, along with their partners-in-crime, Brenda,Barbie, and Cherie, found a magnetic appeal in one particular activity. Each Sunday afternoon, week after summer week, as their preacher daddy and their dear mommy napped after church, those girls jumped off old Mrs. Fair's porch into her spirea bushes. They jumped and they jumped and they jumped.

Where did they get their energy? Surely it wasn't from the pre-jump refreshments-- Mrs. Fair's sugarless oatmeal cookies , which had to be drunk politely with lukewarm powdered milk. Zoanna and her cronies endured that cross for the joy that was set before them.

The girls thought Mrs. Fair must not only have been old, but deaf and blind as well, for they handedly crushed the flora (and probably fauna) by literal leaps and bounds. Oblivious to her own arms as scratched and red as any cat-fight victim's, Zoanna thought she was always getting away with foolhardiness, as long as someone kept a lookout for the Sleeping Pa and No-Nonsense Ma. That's the thinking of a third grader.

They could see their house through these trees. And if the Reverend's children were ever caught misbehaving in that tiny little town, their doom would be delivered at the speed of Kansas wind. 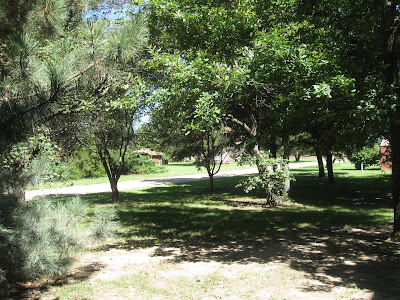 Thirty-eight years later, on a September day in 2010,
Zoanna, Barbie, and Brenda decided it was high time for a Reunion of the Renegades. So they got together from miles apart, descended on their childhood stomping ground (which is still Barbie's stomping ground) and rapped on the old Victorian door. Twice. No one answered. Coast was clear. Do they dare? How about it? For old times' sake.

While scarcely believing the truth of it, they quickly and collectively realized they had grown up, as most girls do. But they certainly had not outgrown their mischievous ways. They had just learned to pretend a little better.

In their memories, those spirea bushes were thick and lush and perfectly capable of guaranteeing a safe landing. Prickly, but safe. The passage of time, however, had somehow made those bushes much thinner, and the girls themselves much thicker. To their credit, those girls had acquired between them perhaps enough wisdom to fill a donut, and thus opted not to perform the full-on reenactment called Spirea Shenanigans. 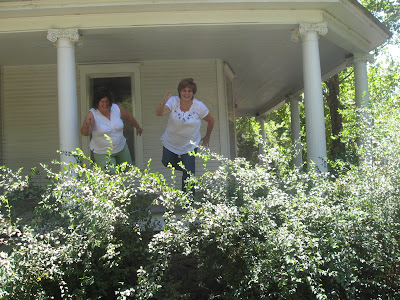 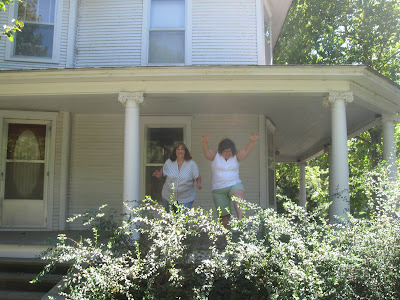 That was a good story.

Good fun memories of our childhood are great!

What a fun post to read! The memories are almost always better than the reality, huh?
I wonder if my 3rd grader is having an adventure each Sunday when her father and I are taking our "nap"?!?

You girls!!!
What silly fun shenanigans! It reminds me of a game of hide-n-seek that a childhood friend and I used to play in a tall wheat field beside her house! We'd duck down into the wheat and stay still- then pop-up randomly trying to spy out each other. We'd spy out the other or sneak up through the rustly wheat only to pop-up and scare the unsuspecting!
Full-on fun! I rejoice that you were able to revisit! Coolio!!

I love it! What a fun memory...and a fun reunion! Thanks for sharing it with us!