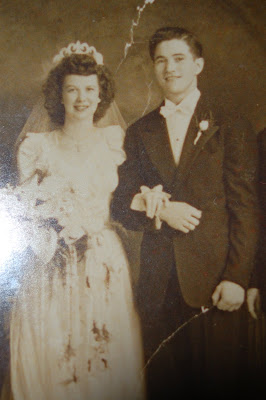 Those who knew her well say she spoke her mind freely. Sometimes what came out was funny, sometimes shocking, sometimes embarrassing, but never phony. I love that about people. Transparency. You didn't have to wonder if she was being honest with you. She was.

I remember the first time I met her. It's not the way most people meet their future in-laws. The setting was a funeral home, late October of 1985. Paul's brother, Gary, was dead at age 33 from an apparent heart attack (which we later discovered was a ruptured aorta). I went with Paul to the viewing, and never before or since have we seen so many people at a funeral home for one person. Three whole rooms with friends, family, and former clients. In the throngs of strangers, I felt lost and out of place in my navy wool suit and blouse. Many of those who'd come to pay their respects were dressed for the bar or the rock concert. The only people I knew besides Paul were David and Donna, Paul's younger brother and his wife. Standing in a receiving line, I remember wondering what to say to the grieving mother. (I could see people whispering, "Is that Paul's girlfriend?" I was happy about that, but sad that we were meeting like this.)

Choked up, I hugged Marcella and said something like, "I'm so sorry about your son. If Gary was anything like Paul, you have lost a gentle, compassionate,--"

"Oh no, oh no!" she interrupted. "Gary was nothing like Paul!" She proceeded to share ignoble things about him, but added what a wonderful plumber and terrific Christian musician he was and the reason so many people were here was because he had led them to the Lord. She finished with "and I'm gonna miss him so much." I didn't know whether to laugh or cry after that. Like I said, a mix of shock and humor. She then pointed to her oldest son, Tony, and said, "I call him my Jewish lawyer son. Look at him in his suit 'n all." (In Baltimore, it comes out "suitnall.")


Another thing I remember about Marcella was how she played endlessly with her grandchildren. The only local grandkids were boys, and she played army with them for hours. Pow! Pow! Bang, bang! Over and over. And she'd play Flea Market. The boys would "sell" anything -- toys, cups, cigarettes, televisions, sofa cushions.

I could envision my future children turning into little merchants because of the wheelin' and dealin' with Grandmom. Between Paul's mother playing flea market and my mother playing Monopoly with them, they'd be destined to become businessmen and women. Or at least in professions where money or children were the focus.

Paul was never quite sure what to expect when she was around, and he was easily embarrassed. One time I was at their home and Marcella and I sat on the sofa, chatting. Paul was, as always, quiet, seated in a chair across from us. I made small talk about a writing desk in the far corner, and then got up to walk to it.

As I stood there with my back to both of them, admiring the pretty wooden desk, Marcella blurted out, "Look, Paul! She's got a nice rear-end, doesn't she?"

Oh, my. Where to from there?

Donna remembers a similar embarrassment when she was out with David a few years prior. They were all three at the mall and wandered, by Marcella's request, into a waterbed store. Mind you, this is David's mother talking as she laid down on a waterbed: "I bet this would be great to have sex on!"

I remember riding in the car with her one time. She was complaining about the seat belt law and how the people who came up with it were obviously men because men don't have "bubs." "If they had bubs, they'd know how uncomfortable these seat belts are!"

Paul remembers his mom not just for her forthrightness and humor, but also for her compassion to the homeless. Having grown up poor, he knew he still had more than some. Marcella began reaching out to the homeless on Baltimore city streets. She took them food and drinks. Then she brought them to the basement of her church for occasional shelter from the cold. Parishioners patted her back, told her what a nice thing that was she was doing "for those people," but few of them actually helped. Then when the homeless folks were comfortable coming to the basement of the church, she invited them upstairs to the sanctuary.

That's where the congregation drew the line. They voiced their opposition to the pastor about the smelly, dirty, "probably drunk or mental" sinners that Marcella Zubrowski was bringing to church. The basement was fine for such people; that was the message. (Paul gets tears in his eyes talking about this memory. I can relate; my parents used to pick up a poor, smelly family and take them to our middle-class, well-coiffed Baptist church in the 'burbs. No one really wanted to get close to those people. I didn't either because of their b.o., but I loved them to the degree I was capable as a selfish teenager.)

The last memory I have of Marcella was when we visited her in the hospital. It was December 7th, 1986. Three weeks before Paul and I were to be married. She was asking what my mom had picked out to wear. "Burgundy," I said. "A floor-length burgundy gown with lace." Marcella, moaning in the bed, shifting often, unable to get nurses to tend her with enough pain medicine, still had the wedding on her mind. "Oh, that'll be nice. I bought a green one with lace. It's real pretty." I assured her I was excited to see her all dressed up and beautiful for our special day.

I never thought that would be our last conversation. Marcella died at 3 a.m. the next morning of a ruptured aorta.

We buried her in the emerald green lace gown she had planned to wear to our wedding. I think of her often when I see that color, and always on the eighth of December. Her greatest Christmas gift to me was her fourth son, Paul. He got quite a bit of her humor, her compassion, and a love for children. Thank You, God, for Marcella.
Penned by Zoanna

I love this celebration of your MIL. And so sorry she missed knowing her grandchildren, she would be so proud. You know what they say, "men marry a woman like their..." oh well never mind! No really, you have the same compassionate spirit as Marcella.

You discribed Marcella very well. She was a wonderful, unique, compassionate person, who never met a stranger. She dearly loved all her grandchildren (and wound have surely loved the ones born to you and Paul. She was a mother who was always praying for her sons to be the men that God created them to be. In my case, she was a friend and sister, who made me laugh and brought a hugh amount of joy into my life. I will always miss her energy and spirit, but I also know, that one day we will laugh together again! Jane

Sweet, fun and funny Marcella and memories!
It's a blessing to honor your mother-in-law!
My favorite babysitter from childhood was named Marcella. I thought she and her name were beautiful!!

What a special post. Thanks for sharing it with us.