My Class: The Year in Review 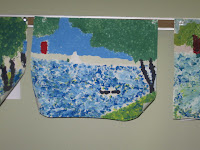 Left: Georges Seurat's technique: pointillism. It took two class periods (almost two hours) for the 3rd-4th grade class to complete their renderings of The Island of La Grande Jatte. One clever child quipped as he neared the 90 minute mark, "This is pointless." 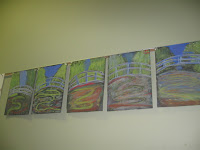 Mini Monets. This was one of the students', parents', and my all-time favorite project. These were done in chalk pastels by 5th and 6th graders. One parent remarked to me, "You HAD to have helped
them!" And I said, "No. I was demonstrating on my own paper, and showed them where to place the first of the three arcs on the Japanese bridge, but they did their own." I showed them how to mix greens and yellows to show where the sun would hit the trees, and how to hint at lilies on the flowing stream (albeit an enthusiastically more sinuous flow than any I've observed on Monet's own pond). 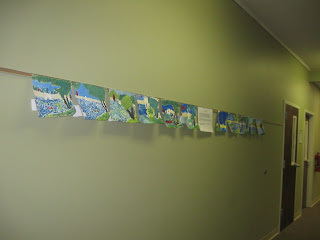 My room is the first one past the paintings. 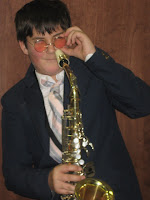 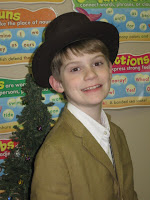 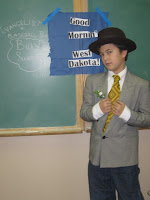 In random sequence, here are some of my favorite shots from the memories we created as a 5th/6th grade class. Please, one small request: for security reasons, if you know these kids, I would ask that you refrain from mentioning them by real name in the comments. I will give them fictitious names. All of their parents have given me permission to post their pictures and I promised I wouldn't use real names.

More to come with other students pictured...Model T, Election Day '08, BizTown, and playground painting.
First up, from our study of 20th century American history is ballplayer-turned-evangelist Billy Sunday, aka Jordon. This guy aspires to be a professional actor. The best way to engage him in learning is to give him a role to play--and require a costume. Each famous person from the decade was being interviewed on our "TV show" which the student had to name. Jordon named his show "Good Mornin' West Dakota". (No, we don't lack for corn in these parts.)

Next, Andrew Carnegie, aka Ryan. A boy with a heart as generous as Carnegie's bank account, Ryan had a pouch of coins in his pocket as a prop. After class, he pulled out one, examined its date, and said, "This one's for you, Mrs. Zubrowski. I thought you'd like something from the 19th century."
The next fellow is jazz musician Eubie Banks, aka Rob. He flourished in any discussion of musical styles and I let them choose their topic for their decade presentation. He immediately gravitated to music, and pulled out all the stops (pardon the musical pun) when he donned suit, tie, shades, and his brother's sax.
Penned by Zoanna

Great and fond memories of work that is WORTH the effort!