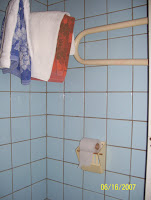 Moscow hotel towels. Clean, but you were fortunate to get two that matched and less than, oh, seven years old. Notice the toilet paper on the wall--sort of--. Not bad if you like to wipe with NEWSPRINT! 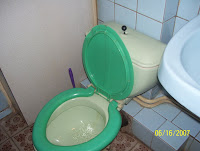 The toilet. Lovely, lively green, eh? Take a look at the top of the tank. See that knob? Lift it up to flush the toilet. Nothing happened? Try again. Harder. Woops. What happened? I broke it off? Now what? After trying my hand at plumbing (yes, literally, very gross) I gave up, washed my hands like a surgeon with OCD, and then used the water from the sink/tub. (Yes, one pipe does it all, folks.) Flush the toilet with a heavy stream of sink water, then stand in the tub and to shower off, holding the very same wand. You will pride yourself in your ability to flex. You are a true missionary when Flex is your nickname--a proper noun--not a verb. 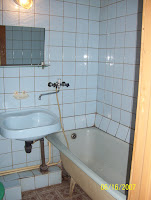 Now that I've shown you the facilities to which I grew rather close last week, I hereby formally invite you to attend my pity party. Come as you are, no dress code required. Food is more than welcome, gifts always accepted, but in my state of mind, you'd probably receive a low dose of thanks in proportion to your thoughtfulness.

The Purple Heart lady called. Marge is her name. We've been on a first name basis since the first time she called years ago to ask if I had any useable household items to donate. She calls about every six weeks. This time she woke me up from a nap. Mind you, it was 6:30 in the evening and she said, "You sound tired," and I said, "I am" and when she asked "what's wrong, hon?" I just wanted to cry. But you don't do that to the Purple Heart lady. She's got her calls to make. Maybe being a Z, I'm her last call. Anyway, I told her I'd probably need female surgery and she asked, "Upper or lower?" I would have chuckled had I been in the mood, but her simple question snapped me like a rubber band in the cheek. I was so caught up in my own selfishness. Of course I'd not given a moment's thought to the fact that I could be dealing with something much worse, so why don't I just shut up, okay? I also told her I still am dealing with jet lag from returning from Russia, and have my days and nights mixed up, and all she said was, "Good heavens, hon!"

It was actually kinda nice being "honned" twice in two minutes. She's the only one that "hons" me now that we're out of Balmer. (For you foreigners, native Baltimore women call everyone "hon". The grocery store clerk says, "That's 64 dolwers and eighty seb'n sints, hon." The drive-thru lady at Wendy's says, "Did you order a large Coake or a medeeum, hon?" You're nothing special to be honned. But if you're feeling weak, tired, lonely, or sick, "hon" is pretty darn endearing. )

I told Marge I didn't have the energy to put together donations this time.

" I understand, hon. Listen, you have a good night and a good 4th and good luck with your surgery, okay, hon?"

So then I was awake and went down to the basement, even though I hate doing stairs. It makes Matters worse. I just wanted to be near Paul. All the older kids are gone. It's Paul's birthday and he has no card, no cake, no nothing. I told him we had planned to celebrate w/ my sister Rachel this coming Monday.Do a joint b'day party since hers in on the 3rd. Jill would make R's cake, and I'd make Paul's fave b'day treat--coconut cream pie. (Rachel is coming from Texas and is probably in DC right about now w/ her family) . Plan A was to meet up at Broad Creek at Watson's cabin, a favorite hangout of ours when we were in seventh and eighth grade. But now we're gonna have to do Plan B--unless I am the only one to bow out and stay home-- and I don't really want to miss the only full day we have planned together.

I snuggled up against Paul on the sofa as he was playing the video version of Lego Star Wars w/ Joel. Bless his heart. What a dad. I curled up to him and said, "Honey, I can't take this anymore. I can't! I am so tired. So worn out. How can I wait till the 12th? They won't do anything but tell me to come back to have something done. I know there's not a daggone thing you can do about it, but I need some lovin' . Some good ole fashioned lovin'." Then I started crying. He was in the middle of the game and told Joel let's wrap it up.

Joel, precious sunshine, came over and hugged me tight.
"What's wrong, Mom?"
"Oh, I'm tired, honey. And sick. You wouldn't understand."
"I bet I would."
I chuckled the way he said it,all grown up like.
"You know, Mom, laughing makes you feel better." So he started pulling out all the tricks. Wiggled his ears, told me his interrupting pirate knock knock joke for the 330th time, and danced like a jerky mummy. I felt a little better.

I don't know if it's all men, or just some, but mine does not handle his wife's medical woes with great understanding. He did an OUTSTANDING job when I was a virtual invalid after Joel's birth, but since I can walk, roll over, and dress myself, I must not be that bad off. He took Joel for a test drive in an old car we're considering for Sarah. He doesn't attend pity parties and certainly not on his birthday. It's hard enough to admit your own body's falling apart, let alone your best friend's.

So if you want to join my party, rsvp in the comment box. Or leave a note saying you've got other plans which include praying for me. I'll understand.

Yes, I am pitying you, friend. But aside from that I just have to say that this post was so cleverly written! You made your suffering, hmm, how shall I say?...entertaining? Thanks.

Still praying for you.

Yes, you have my sympathy and prayers.
And you are so young. You have too much ahead of you to be so tired.
A couple of days ago an insurance man said, "You are doing great, you can take care of yourself, you can get around, and you have a good mind, and a sense of humor. So be thankful."
He sees so many so much worse off that I can understand and it makes me thankful for even being 81 and handicapped with arthritis, etc.
So, this is not a lecture!!!but be thankful and there are many like me who are thankful for you, too.
Thank God every day, He will never leave you.
Betty G