Ours at Last: Adoption Day for Reilly 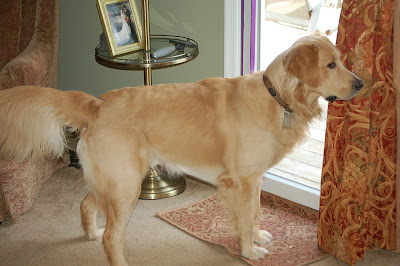 The dog we've been praying for since Molly died on January 7th. No, it doesn't sound very long, and I thought it'd take more time for me to start the process of looking for a new dog. I mean, when you've had the best dog ever, then what? You pray. And when a good thing falls through after that, then what? You pray more. And then you wait. You pray and wait. Wait and pray. And then, that answer to prayer finally comes. For us, it came in the form of a purebred Golden Retriever named Murphy (his previous name).

We quickly renamed him Reilly. Reilly means "courageous." His name reminds me of the courage it took to walk Molly through her last days. It took courage for this dog's previous owner and her 11-year-old son to put him up for adoption. "Murphy" had been a gift from her dying father a year ago, but the new landlord had a no-dog policy. (Ironically, Reilly is scared of Sarah's fish.) And perhaps, God willing, Reilly will give hope and courage to many suffering and lonely people someday when we do Therapy visits together.)

Saturday, February 19th, was the big day. It was more than eventful:

1. From 10 a.m. till noon, we had Joel's birthday party with 7 other boys at a place called Lunar Golf at a local mall. Then we took them to Chick Fil-A. He was one happy boy. I felt unusually weak and had a gripping headache, but adrenaline was a grace in the moment.
2. When we got home from the party, I immediately discovered a complication from surgery that I thought would send me back to the ER. There I was, looking at the clock, lying in bed at 1:03 pm, freaking out that I'm having massive blood loss AND I'm supposed to be getting this dog in two hours in Pennsylvania. I called the doctor and he said it wouldn't be an emergency unless I lost a lot more blood or my blood pressure went to 90/60. It was on the high side(146/98) from all the nerves, I guess. The doctor said it was a hard call, but he advised I go to PA, keep drinking a lot of water, and take it easy.
3. I rode in the back seat of the van with Joel, feet propped up on him with a pillow. Paul and Sarah were up front, Ben and Dee in t 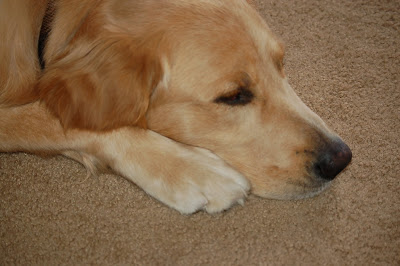 he middle. If Ben rides in the van, you know it's a big deal.
4. When we got to the adoption center/pet store, we happened to be parked right next to the previous owner. She got out slowly, her son even more slowly. I didn't see the dog at first. I greeted the lady; her son wouldn't make eye contact; the wind was whipping us like a cold towel in the face. And then I saw the dog. Beautiful! Strong! Active! Friendly! I kept saying, "He's gorgeous! Oh, my! He is beautiful!"

But I was also rushing into the pet store to get in out of the cold and to use the restroom. Some things just can't wait. This was not the scenario I had imagined for this occasion. Just the opposite. In my mind, we would have a long talk about him, together, maybe walk with him, me asking questions about all his little habits, likes, dislikes. How her son was doing today. How she was feeling. But the reality was: a very preoccupied me in the bathroom where a demon cat was being caged, me hoping I wouldn't get an allergy or claw attack by it, people waiting for my signature as the adoptive owner, crowded store, customers, animals. Overstimulation at every turn.

There was so much I wanted to say to comfort the woman giving him up, whose son sat cross-legged on the tile floor, petting the dog when he'd whisk by on Ben's leash. But when I finally could, I hugged the woman and just barely managed to say, "Thank you! I know this must be so hard for you." She broke down crying, nodding. I cried. Her son cried. Sarah cried. I said to the boy, "I am so sorry," and he said, "It's not YOUR fault! It's the LANDLORD'S fault I can't keep my cute little puppy." (This 74-pound "little puppy"!) I assured them we would take good care of Murphy. We asked the boy if he'd like us to take a picture of him. He said, "Yes!" and begged us to email them right away. Poor kid. I said, "I wish you could keep him, too, and that we could find another one as great as him."
5. The pet store was located on a busy road, and the dog had only a thin leash and narrow collar. We'd be replacing those ASAP. The only person I trusted to be strong enough for him was Ben. So Ben took him out to do biz and Paul pulled up the van. We all piled in. Reilly loved us all instantly, going from person to person,
not licking obnoxiously, just sort of nuzzling each of us. I felt complete. The ears did it for me.
It was the feeling I'd been waiting for a long time. I whispered a prayer of thanks to God for filling the void in my life with this golden gem. Reilly rode calmly all the way home, occasionally making his rounds to get to know his new family. I don't think he ever looked back for the old family.

6. Reilly had not been brushed well for a long time. He shed all over us. Big time.
After a good brushing... 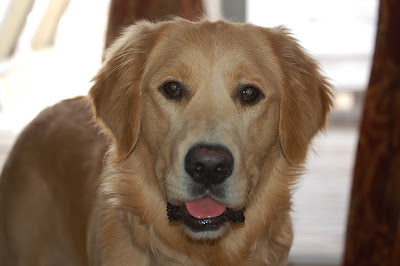 7. Paul and Reilly hit it off immediately. Paul has not been an enthusiastic dog person until recently. But in the past couple of weeks, he has been watching dog shows on TV, telling us all about training, and setting up sleeping quarters for him (ie bathroom the first night, crate the second).

8. We took pictures all the way home.

9. The lady had warned us to watch out: "He loves pens." I'm thinking, "Perfect. He has a penchant for pens." But so far, I have not seen him try to get hold of one.

He's got a hold on our hearts, though. That's for sure.

Congratulations! He is precious. Golden Retrievers are fantastic. They have wonderful spirits of generosity. Hope all goes well as everyone gets used to each other!