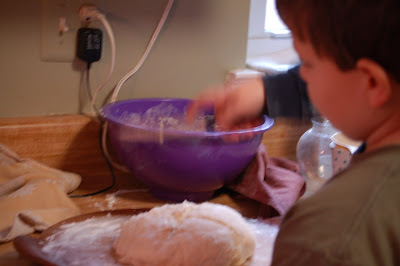 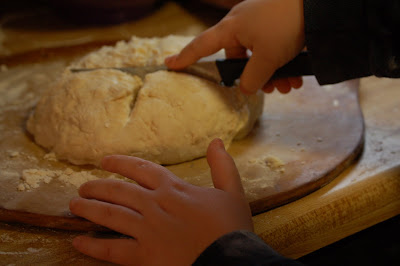 We should do more hands-on stuff like we used to in our home school
We've gotten too workbookish. Blech.
So yesterday I says to m'self, "We're gonna make this here Damper
Bread from this here geography lesson about Australia."

And we did.
Sort of.
The chemistry wasn't right. It called for 6 cups of self-rising flour.
I had only all-purpose, and when I consulted the conversion chart to
see how much baking powder to add for some "rising power," it would've
been something like 9 teaspoons. Can you say hypertension? I nearly had
a stroke reading that .So I did my own thing. Scientist that I am.
Added about 2 tsp baking powder and 9 cups skepticism.

Let's just say the most fun part for me was watching him enjoying the process.
Especially the part where he got to cut a big X in the top. Nothing else mattered.
A mom, a boy, a lot of flour, a hint of science, a bit of Down Under-ing, a heaping of doubt, a floppy result. Unless, of course, it's supposed to turn out Damper in the Middle than Any Other Bread I've Ever Made. Or not rise a'tall, mate.

Every now and then I'd reach over and caress his whipped-cream cheeks and just smile. Phooey on the baking powder. Who cares? I loved listening to his still-high voice; it'll deepen in a few short years, and so gradually it'll be like waking from a dream. I will want to go back to my dreamy state because I won't remember that voice, as hard as I try. I know I won't remember. I have two grown sons whose bass voices bellow from the shower or just sound so ...manly...on the phone. I'm sobered by the fleeting of time as my adult sons come to my aid in the kitchen to they reach things I can't reach without a chair.

My baby boy one will turn nine years old on Valentine's Day. I remember wanting him for ten years before his birth. Now we are nine years past it? Too soon he will want only his dad's attention. It happens. It's natural. It's sad. It's healthy. Too soon after that he'll want to spend every waking moment possible with a girlfriend, just like those brothers of his. t happens. It's natural. It's not all that sad (a bit scary). Usually healthy.

Too soon I will have what I've always dreaded-- an empty nest.


Talk about putting a damper on our Damper Breadmaking Day!
Penned by Zoanna